In a recent episode of The Big Bang Theory, character Sheldon Cooper designed a highly complicated three-person game of chess, with an odd-shaped nonagon board and two new pieces—serpent and old woman. Seemingly pioneering, in truth, three-player chess has been around since the early-1700s, with many different variations, most of which retain the basic game structure and sixteen pieces that each player controls.

A newly released variation is called 3 Man Chess, a circular board that claims to "accommodate three players, without compromising any of the rules, strategies, or competitive challenges" of conventional chess. 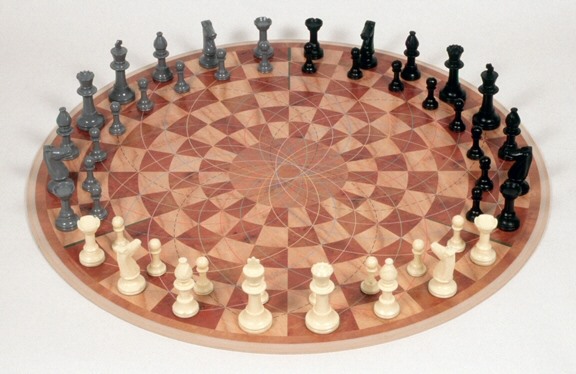 The gameplay is pretty much the same, with most of the traditional rules applicable. The center of the board could get pretty tricky, and consider yourself checked if your two opponents decide to join forces and gang up on you. 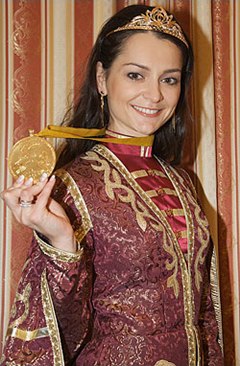 Curious, I asked Russian chess Grandmaster Alexandra Kosteniuk what she thought about three-player chess, and the former Women's World Chess Champion responded, "Chess is hard enough without having to figure out strategies in case two players team against the third. Chess is a fair game, one person against another, both starting with the same number of pieces. How can the game be fair with three players?"

Indeed, there will always be an imbalance with three player chess, so is it worth trying out? If you're a diehard chess fan with a yearning for a twist, surely.

If you want to take a stab at some three-player chess without the commitment of purchasing a full game, you can try out an online version, like ThreeChess. And instead of shelling out more than $40, it's probably worth making your own board; Just outline a similar gridded board on some paper or cardboard, grab three players worth of pieces from a few classic sets, and whip out the spray paint.

I wonder how difficult it is to checkmate both opponents at the same time?

Want to master Microsoft Excel and take your work-from-home job prospects to the next level? Jump-start your career with our Premium A-to-Z Microsoft Excel Training Bundle from the new Gadget Hacks Shop and get lifetime access to more than 40 hours of Basic to Advanced instruction on functions, formula, tools, and more.

Other worthwhile deals to check out:

Join the Next Reality AR Community

Get the latest in AR — delivered straight to your inbox.

ThreeChess is fair enough, because the winner is only one and it is the first who takes the king of some of the opponents. There is no sense to make cooperation with enemies in that case and the game is free for all :)